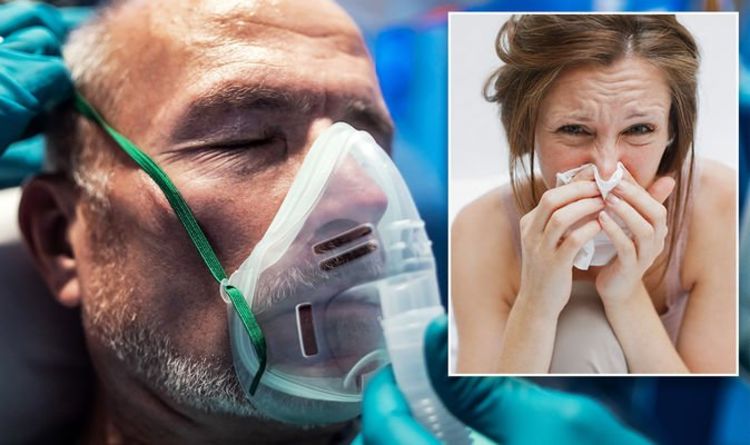 Dr Jenny Harries, executive director of the British Health Safety Agency, spoke on the show Andrew Marr and said that one of the biggest threats this winter is the flu, noting that there could be between 11,000 and 60,000 deaths.

She said: “We have not been exposed to the flu before, people are more susceptible.”

Harries continued: “People are at a higher risk of death and serious illness if they are infected with the flu and Covid at the same time, and this does not seem to be a fact from our studies that many in the public understand.

However, she said that there was an “extremely good adoption of the vaccine”, which now prevents significant amounts of hospitalizations and deaths.

Marr asked if she was worried about the vaccine and this particular strain of flu because not so much flu was circulating, as a result of wearing the mask and staying in it.

Harries replied: “This is a more uncertain year, but I would certainly encourage everyone to go for the vaccine.

“As usual, we’re working with the WHO and looking at what happened on the other side of the world, because obviously their winter season is in the first place, and we have a multi-strain vaccine.”

However, she said that there is a certain degree of uncertainty, partly because of the smaller number of cases, but also because people will not come so much for testing, so there are fewer samples.

She said: “This is probably the first season in which we will have significant amounts of COVID, as well as the flu.

“People’s behavior has changed, we are interfering more and more, winter is coming and everyone is going indoors.”

She added: “The difficulty is that at this moment of the pandemic, one of the most difficult times is to predict what will come.”

This is partly because we have different levels of vaccination and “little immunity declines in the elderly”, which is why there is an incentive system.

Harries said that in the average flu season, there are about 11,000 deaths a year, “so we’re starting to move to a situation where COVID may not be the most important element.”

The NHS England said on Saturday that three weeks after the start of the program to increase the pressure, a total of 2.08 million third blows were given.

The third injection is given to the NHS for people most at risk of COVID-19, who received a second dose of the vaccine at least six months ago.

As with some other vaccines, the level of protection may begin to decline over time, and the booster aims to give you long-term protection.

Harries was asked how seriously we should take the problem children face, given that they are generally less at risk.

She said: “The critical point is that they are less at risk, but that does not mean that we should not take it seriously.”

She added that she thinks there is a really important balance between the risk of the virus and the risk of not attending school.

“I think it’s important to make sure that children don’t go to school if they are contagious,” she said.

The NHS is currently offering the first dose of the COVID-19 vaccine to people aged 16 and 17.

If you turn 18 within three months, you can get another dose.

The first dose of the vaccine against COVID-19 will be offered to children aged 12 to 15.

“If your child qualifies for two doses of the vaccine, you will be contacted by a local health service, such as their general practitioner, for an appointment,” the NHS website said.