He lives for fishing and fishing 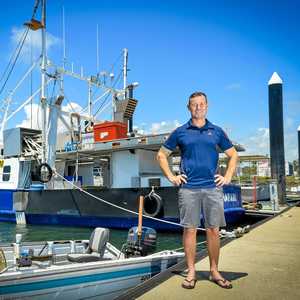 Crew of a fishing boat Maharani have a job that many people envy.

Manager Vill Neill said that fishing on the Great Coral Reef is an incredible work environment.

"We had to stay on the ridge during the recent winds.

"We were the only ship there in the last blow and we were stuck there for five days and waited to clear it."

The Maharani has seven crew members, captain, deck and five fishermen who go to sea for two weeks.

"We are hunting the Svains Reef, which is about 120 nautical miles from Gladstone and it takes 18 to 26 hours to get there," said Mr. Neill.

"We will lose to the ridge around 18 times a year and we will fairly go out in all weather conditions."

Fishermen work on the road using a line of hands to catch about 30-50 fish every day.

"Sometimes we could catch anything in some area, and then we'll be back a week later and the boys will catch 50 fish every day."

Most of the fish are processed on the ship and freezes, but the coral trout is stored in a large reservoir on Maharani.

"The reservoir is huge, it goes by the length of the boat," Neill said.

"Living coral trout goes to Brisbane, Sydney and Melbourne, and about 22% is exported, mainly to Hong Kong.

"All of our frozen product, about 25 tons a year, goes to local fisheries markets."

He said that fishermen spent most of the day alone in fishing on the ridge.

"Svains is so huge that we rarely see other ships there," Neill said.

"It's an incredible job, especially when the weather is good."