"Mom, I think I'm dying": A diagnosis of a shocked popular mentor 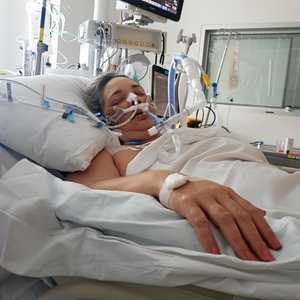 It was almost a week since Delvin Shepherd-Frame and her daughter, Kiri Shepherd, had their lives turned upside down.

What doctors at first thought might have been a bite turned out to be a devastating diagnosis of Guillain-Barre's syndrome for Kiri, a 42-year-old popular mentor at the University of the Sunshine Coast.

Delvin has told a frightening guide to diagnosis.

She said that Kiri complained about a headache last night on Monday, which lasted until Tuesday, when the needles and pins began to break through the whole body.

Until last Wednesday, the needles and needles had been torn off and she was struggling to talk.

"It was like she got a paralysis in her mouth," Delvin said.

"She could not walk."

Doctors are the first suspected peanut bite, lack of vitamin B12, or even a stroke.

"The next day she thought she was dying," Delvin said.

Kiri returned to the doctor on Thursday, who told her she could get Multiple Sclerosis, but MRI scan was clearly shown.

That's why she was on a bicycle on Friday saying she "does not leave here until you tell me what's wrong with me."

Lumbar punctures were taken and the doctors advised everyone to be sure that Kiri had a Guillain-Barre syndrome, an autoimmune disease in which the immune system of the body attacks the peripheral nervous system.

Delvin said that they were told that only three cases a year in the University Hospital of the Sunshine, and that the average recovery time for nerve cells for reconstruction was about four months.

However, some cases were up to two years or more, and in rare cases, patients never fully recovered.

They had no indication as to how long Kiri would recover, but Delvin said that her daughter showed some positive signs and hoped that she might be able to take the ventilator tomorrow in the next few days.

She was placed in an intensive care unit while suffering from asthma and could not breathe alone.

Kiri went to physiotherapy twice a day and received medication to stimulate her immune system and fight the condition, which is usually caused by viral or bacterial infection.

It was another blow to Kiri in what was difficult for several years.

A triple-level holder, who hoped to complete his doctoral dissertation next year, moved to the Glass House Mountain with his mother to help Delvin recover from cancer after diagnosis three years ago.

Kiri helped to preserve her mother, working on her 1.2 ha property and taking care of Delvin's daddy's wheelchair before being hit by rare conditions.

"She is very popular, she is always given to people."

She started collecting funds for Kiri in an attempt to help her pay her bills while lowering her earnings, and Delvin, a retired woman, tried to provide her with powers of attorney to help organize her daughter's finances as she recovered.

Get the head of Gofundme.com and look for support for Kiri Shepherd GBS.