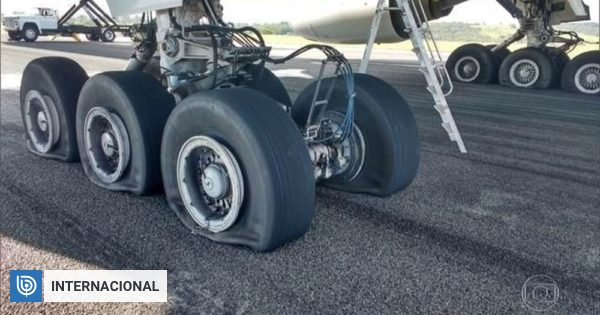 The flight of Latam Aircraft was seriously damaged after an emergency landing, registered early Thursday in the city of Belo Horizonte, in the southern center of Brazil, and forced to close the runway of Tancredo Neves airport.

The LA8084 flight covers the Sao Paulo-London route, when He suffered a breakdown and had to land in Belo Horizonte, on Thursday around 1:43 local time (00:43 in Chile) and stayed on the track for 21 hours, delaying departure for more than 30 flights and limiting the operation of the air terminal.

The accident happened an hour after the plane was flying at Guarulos Airport in Sao Paulo, so the tank's fuel tank was almost fully loaded, resulting in when the tire is lowered, the tire will blow when the safety system is activated.

The safety system has removed the air from 8 of the 14 tires on the Boeing 777 to prevent an explosion from landing, After touching the ground, airport officials went to cover the foam to the sector in which the machine was located.

LATAM Airlines Brazil Boeing 777-32VER carried out over landing at Confins International Airport in Brazil. This caused the exhaustion of more tires. The plane was disabled on the runway 13, which led to the closure of the airport. https: //t.co/mE3hKs1LCea pic.tvitter.com / ihiGFnl2Bs

Even Hercules airplanes of Brazil had to help emergency teams at the airport to remove the plane, G1 portal reported.

According to passenger statements interviewed by Brazilian media, pilots informed them that because of an electrical failure, the plane had to land in Belo Horizonte, which was not confirmed by the company.

Latam explained through the statement that passengers were free from injury or damage from the incident, and cooperated with the authorities to determine the causes that led to an emergency situation.