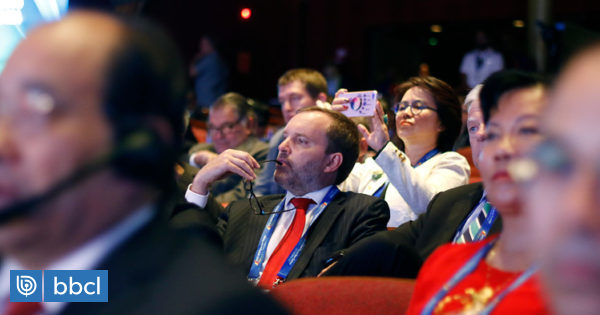 Already held 34 days for the cessation of activity and the blockade of the South Pacific Terminal (TPS) led by temporary port workers. Despite the confidence the government expressed after the meeting with leaders and reached a preliminary agreement, yesterday the proposal was rejected unanimously by the base.

Richard von Appen, president of Ultramar, the TPS controlling company, continued to ignore the controversy following the board of director Sofofa in Santiago: he fostered the attitude of the workers and pointed to President Pinera's call to end the intransigence on both sides.

"It is unbelievable that we have met with leaders and have increased our support four times.This is a gift, it does not need any assembly, only they have to say whether they are taking it or not.Yes, we are intransigent with the people who have broken, who attack our offices and our people. In that, we are untenable, "he admits.

So blunt. Von Appen emphasized the concept of "help" and "gifts" to workers. In the past, he stressed that in a complex situation, they criticized the level of violence and intolerance of the demonstrators.

In this regard, he emphasized that they increased the amount of 200,000 to 800,000 pesos, which were delivered through the document to workers who are currently doing their job, despite the actions of the striker, emphasizing what he considers the "patriotic sense" of defending activities.

But doctors consider that TPS's concessionaire does not provide any solution to their demands for job advancement, as they point out, only through the limitations – through the Executive – to submit the same proposal presented last week.

Therefore, the insistence of the Ministry of Labor and Transport in its role as an intermediary was not sufficient, as such an offer is not approaching the expectations of the workers.

Valparaiso's spokesman, Pablo Climpell, has ratified that the strike and the blockade of the port will continue indefinitely and will also launch an offensive on other terminals in the country.

"It's an inadequate proposal, it's not a bonus for financial compensation, it's pure credit, a gift card that limits you where you can spend money, money is not available to people, and on the other hand it's job training," he said.

In so many words, he answered Von Appen's statements: "When someone gives something, it's not removed. What we offer is a loan of 550 thousand pesos, that loan has to be repaid, I will have to pay for a year and a half. is a loan, "he said.

"I do not know where the gift is or where it is hidden," he said.

On Wednesday, before the rejection, President Sebastian Pinera urged both parties to resolve the conflict so as not to hinder the work of exporters at a crucial time for that sector.

"A time has come for maturity, common sense, dialogue and cooperation. A country like Chile can not work well if its ports do not work well," he said.

The Minister of Transport, Gloria Hutt, who leads the mediation conducted by the Executive Committee, expressed regret over the failure of the previous four-point agreement, the purpose of which was to create a table for solving the structure of port work and improving its legislation, job training, soft credit from the company , plus a bonus to break the conflict.

Although the Minister described some of the offers delivered by TPS as reasonable, she also acknowledged that "the company can do more." Given the lack of direct communication between the company and workers, "What we do are good-will jobs," he added.

Of course, one of the demands of port workers to remove the strike is that after the mobilization there is no black list with those demonstrators who were part of that movement, given what they want to regain their working dignity.

However, the director general of the concessionaire Oliver Veinreich reiterated that the company can freely decide which work it will work in order not to risk its business, in addition to defending the flexibility of work, given the modality of possible works – In accordance with the most modern legislation in the world.

After unanimous rejection of the previous agreement with the government, mobilized workers reached the TPS's periphery, where they interrupted access gates and entered as a sign of refusal of what the company offered.

Given this situation, at about 2.00 hours, Special Forces operated with spears and rifles, a situation that triggered conflicts that took place near the long-distance union trade, where they dumped Molotov cocktails and blunt objects, reducing traffic in an occasional form.

The droughts continued at around 19:00, when the barricades crashed Blanco, Cochrane and Serrano streets. However, the clashes lasted 30 minutes, and then there were no incidents.