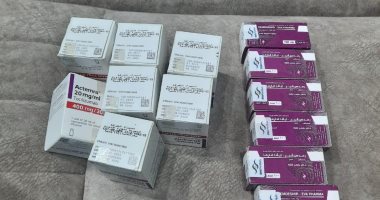 Inspectors of the General Administration of Pharmacy in Cairo were able to follow on social networks one of the promoters of the sale and purchase of drugs against corona on the black market, as well as numerous health insurance drugs for critical cases, in the city department of Nasra, in cooperation with public administration supply investigations from Major General Essam El-Azab and Major General Mohamed Ragai, where one of the drug traffickers was arrested on the black market, after a successful purchase attempt, with the participation of Dr. Iman Abdo, Director of Inspection, and Dr. Salma Al-Anwar, Deputy Director of Pharmaceuticals inspections in the Directorate for Health Affairs in Cairo, and records were made and the necessary legal measures were taken.

Dr Ola Khattab, director of the General Administration of Pharmacy in Cairo Health, said the official price for one syringe is £ 6,641, which they sell on the black market, ranging from £ 8,500 to £ 14,000 per syringe, which is given to intensive care cases and smuggling them to the black market, and the inability of patients to obtain them is considered a threat.

Dr Ola Khattab, director of the General Directorate of Pharmacy in Health in Cairo, said that the strategy of this department aims to control the drug market, not allowing any opportunity for smuggled drugs to enter the drug market, or exploit citizens and sell them drugs for more than theirs. prices.

For his part, Dr. Karim Salam, Undersecretary of the Directorate, said that the General Directorate of Pharmacies is working to control the drug market, and not to trade in smuggled drugs within the Egyptian market.

Dr. Mohamed Shawki, head of the health sector in Cairo, said that the directorate strives to monitor all pharmacies in order to follow the instructions, preserve the drug on the market and not manipulate citizens, adding that this is a continuation of the directives of Dr. Hale Zayed, Minister of Health and Population. to control the drug market and prevent Corona’s smuggling, theft and drug trafficking on the black market.