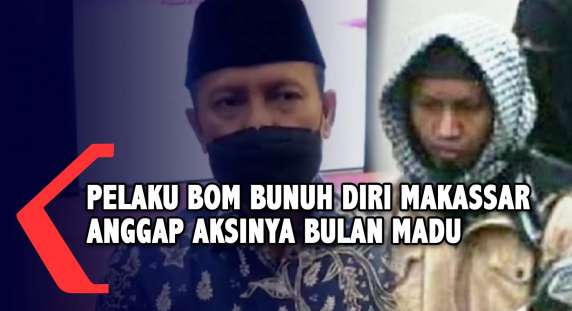 JAKARTA, KOMPAS.TV – Two suicide bombers in front of the cathedral in Makassar on Sunday (28/3) considered their action a honeymoon.

The head of the BNPT, Komjen Boi Rafli Amar, also considered that their actions were beyond common sense and far from religious values.

As it is known, the two perpetrators were a married couple who just got married 6 months ago.

L and his wife ISF are members of the Jamaah Ansharut Daulah (JAD) group in South Sulawesi.

They were married by R, a suspected terrorist who was involved in the bombing of the cathedral church in Jola, Philippines.

During the suicide bombing, it was determined that the woman was 4 months pregnant.

The two of them are known to often attend the recitation of a jihadist doctorate in the cluster of Villa Mutiara Biru Housing, Biringkanaia, Makassar.

According to the head of the BNPT, Komjen Boi Rafli Amar, the recruitment of members of terrorism is currently the target of millennials.

According to the boy, millennial circles are easier to indoctrinate and are considered effective in committing terrorist acts such as suicide bombings.