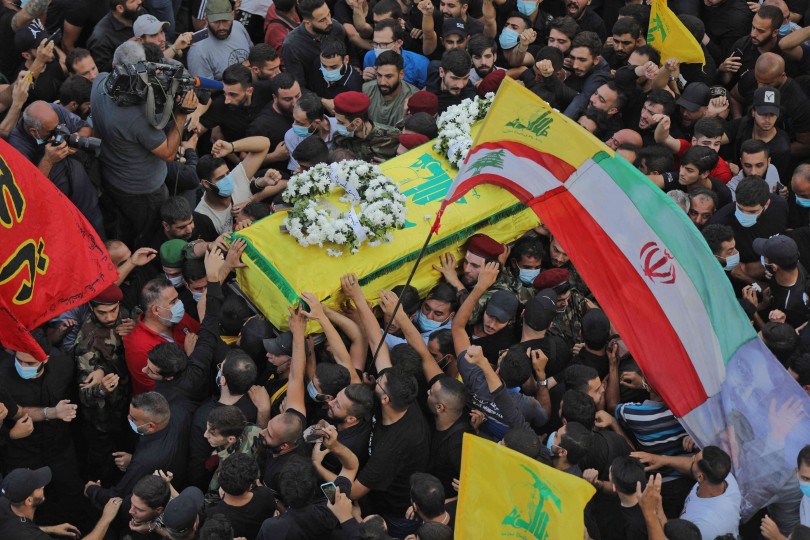 Beirut: Everyone agrees that the situation in Lebanon after the explosion of the port in Beirut is not the same as before. The issue, which has occupied the whole world, is still interacting, and its last chapter is the bloody conflicts in Beirut between Hezbollah loyalists and unknown armed attackers.

On August 4, 2020, a mass explosion occurred in the port, in which 218 people were killed and about 7,000 others were injured, as well as huge material damage to large residential and commercial buildings, as a result of storage of about 2750 tons of seized “ammonium nitrate” since 2014. . years.

This is an overview of the most prominent positions and movements of “Hezbollah” from the explosion of the port in Beirut, until today.

August 7, 2020: Hezbollah Secretary General Hassan Nasrallah has denied any connection to the party with weapons stored in the port, after being accused of this, and called for a fair and transparent investigation into the blast.

August 18, 2020: The International Court of Justice for the assassination of former Prime Minister Rafik Hariri convicts Salim Aiiash (linked to Hezbollah) of assassination, Nasrallah responds that the party is not concerned about court decisions.

September 22, 2020: Injuries are caused by the explosion of the Hezbollah weapons depot, which took place in one of the Iklim al-Tuffah buildings in the south of the country, and the Lebanese army has opened an investigation into the incident.

January 3, 2021: A dispute in the southern city of Adloun, between Hezbollah-related elements and elements of the Lebanese Communist Party, following comments and statements offensive to Nasrallah on social media.

February 1, 2021: Hezbollah shot down an Israeli drone over the southern city of Blid.

February 4, 2021: Assassination of Hezbollah political activist Lukman Salim, and Nasrallah refuses to accuse his group of the incident.

August 6: Hezbollah fires dozens of rockets from southern Lebanon at Israeli sites, and Israel responds with artillery shelling at locations inside Lebanon.
Same day: A number of residents of the southern city of Shwaia (most Druze) are arrested by a Hezbollah rocket launcher used to attack Israel, and its workers are arrested before the Lebanese army intervenes and solves the problem.

Also on the same day: a number of Hezbollah supporters expelled farmers from the Druze community who were selling figs from cities in southern Lebanon, but the incident did not develop and was quickly resolved.

August 7, 2021: Nasrallah begins a campaign against Judge Tariq Al-Bitar, a forensic investigator in the Beirut port explosion, accusing him of being “politicized.”

August 18, 2021: Hassan Nasrallah announces the launch of Iranian oil tankers to Lebanon and warns Washington and Israel not to target them by sea, to successively reach the Syrian port of Banias and land in Lebanon via illegal crossings.

August 21, 2021: There is a dispute between Hezbollah supporters and the Lebanese “Amal movement” in the city of “Loubia” in southern Lebanon, which led to death and numerous injuries, amid the display of Ashura banners.

September 16, 2021: The first batch of Iranian diesel tankers enter Lebanon, illegally entering the country, as Hezbollah’s step to alleviate the crisis of market material loss, and is distributed according to a plan developed by the party (including donations and some in exchange for money ).

September 20, 2021: It is reported that a Hezbollah official sent a threatening message to Al-Bitar at the Palace of Justice in Beirut, stating that the group would remove him from the investigation, and the public prosecutor, Judge Ghassan Oveidat, subsequently asked Al-Bitar Bitara to prepare a report on what is circulating regarding this threat.

On October 1, 2021, the party shot down an Israeli “drone” that entered Lebanese airspace, according to photos published by its military media.

October 11, 2021: Nasrallah criticized Judge Tariq Al-Bitar, accusing him of bias and politicizing the case, calling on a “fair and transparent” judge to end the investigation into the case.

October 13, 2021: Postponement of Najib Mikati’s government meeting after ministers affiliated with the Amal and Hezbollah movement refused to attend unless he intervened to dismiss Judge Al-Bitara, and calls from supporters of the two parties to demonstrate against Al-Bitar’s decisions.

October 14, 2021: Unidentified individuals fired heavily on Hezbollah and Amal (two Shiites) supporters in the Taiouneh area (mixed between Shiites and Christians), during demonstrations condemning Al-Bitar’s decisions.
Armed conflicts between the two sides led to the killing of 7 people and the wounding of 32 people.

For almost two years, Lebanon has been suffering from a severe economic crisis that has led to a deterioration in the value of the domestic currency against the dollar and a sharp decline in foreign exchange reserves with the Central Bank.