liveTEKST NOW Continue in the Champions League for Dinamo with Elverum 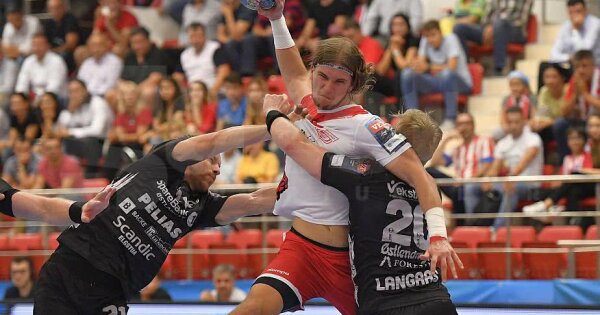 min 37: Dinamo is under pressure! Elverum has the beginning of a sensational half and returns in just 7 minutes from 15-12 and leads from 19-18
min 34: It starts hard for Elverum, which reduces the difference. In 4 minutes he scored 3 times. Dinamo is only once and plays in inferiority for two minutes
min 31: started the other half!
min 30: PAUSE AND NORVAI! Dynamo is in the lead, 15-12.
min 28: Komogorov scored, but the Norwegians quickly defeated and reduced the difference again. Dinamo has 3 goals and an attack
min 27: Sandra rocket rolls. The opponent with his pitching hand disappears, and the Norwegian player has fallen, full of blood, a broken nose
min 25: Goal Dinamo, goal Komogorov. Dynamo plays incredible in Norway, and Saed is imperial. After 10 minutes weak, Dinamo's goalkeeper managed to parade the parade.
min 24: Gavriloaia has a lot of aeronautics and brings Dinamo into the lead. Two goals scored by Dinamo in inferiority. Elverum, on the other hand, is wrong and dynamics can go away
min 23: Acatrinei scored a goal when Dinamo was inferior, but Westbie scored immediately at the counter. E 10-10
min 22: The Norwegians are back on the table even though Saed had two parades. However, the dynamics are rushing to attack and miss the attack after the attack
min 20: Saed got in his hand. Parade after the parade for goalkeeper Dinamo. But Mousavi is eliminated for two minutes, but the dynamics have an attack and can increase the advantage
min 18: Gavriloaia gets to the semicircle after a quick counter-attack and strikes for Dinamo
min 16: Komogorov rejects, but the Norwegian goalkeeper refuses. Sandell then gets a score for Elverum, which is favorable
min 15: The two Sae's unusual parades hold the table on the table and give Dynamo a chance to return to the lead. These were the first interventions of the Dinamo goalkeeper
min 12: Savenco is for Dinamo and restores equality. On the counterattack of Elverum, double dribbling and Gavriloaia are immediately achieved and bring Dinamo into the lead for the first time
min 11: The vestibule has 7 meters for Elverum. Dinamo players play in inferiority for 10 minutes
min 10: Komogorov is well placed with a very strong throw, with soil, and then Zulfici is a result of 7 meters
min 9: We are 7 yards, but a safer defense is needed to get back to the game.
min 8: Black loses completely with the Norwegian goalkeeper and again Elverum stands out and score goals.
min 7: Minimum angle for Nicolas Negru, who scored a magnificent goal and pierced the ice for Dinamo. At the counter, Elverum again plays with a throw of 9 meters
min 5: A catastrophic beginning for the Romanians. Elverum has 2: 0, Dinamo is not brilliant at the front of the door
min 4: The Norwegians started safe, the dynamics triggered the attack. Elverum scored the first in this match.
min 1: Start of the match!

Red-whites, who so far gathered in Group D for ten points, played Elverum Handball, and the team in Sweden scored eight points. The match between Dinamo and Elverum can be seen liveTEKST and GSP.RO.

In the last two stages, the band in Romania will be the last to rank, Riihimaen Cocks, November 21st at home and Vacker Thun, on November 29th.

* The first two qualifications qualify in the sixteenth league league, where they will play a cross with the first two places in group C
– Groups A and B are composed of very strong teams, and C and D, which are merged separately, are from teams coming from the second wave
Teams A and B teams will be able to win the C and D teams in the final