Named the most popular foreign cars assembled in Russia – URA.RU 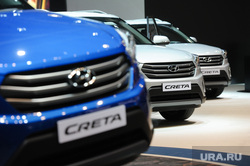 Automotive experts have compiled the rating of the most common cars that are assembled in Russian factories. The list was published by the analyst agency "Avtostat".

According to experts, from July 1, 2018, about 9.7 million foreign brands were registered in the Russian Federation, or 22.6% of the total number of passenger cars in the country. Among these machines, the most popular brand is Hiundai Solaris. These cars in Russia – 704 thousand copies, and their Russian assembly began at the end of 2010.

On the second line is the Korean model KIA Rio. The owners of these cars are about 674 thousand Russians. The trial of these models began at the end of 2006 and has been consistently available since 2011.. Three leaders close Renault Logan. These machines in Russia, about 654 thousand copies, their production began in 2005.

In early August, car experts called the most popular second-hand cars in Russia, RT recalls. On the first line was Ford Focus, on the second – Toyota Corolla, on the third Hiundai Solaris.