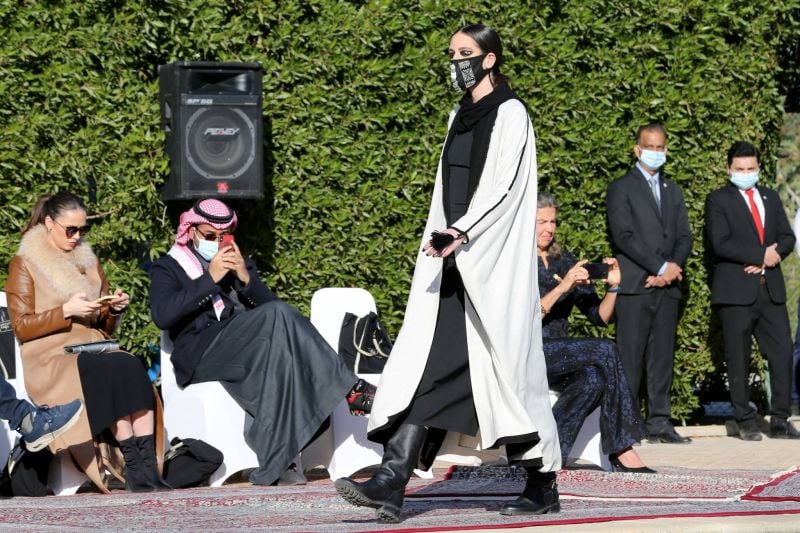 Covered from head to toe in long traditional Gulf dresses, female models in high heels follow each other around the pool, on the occasion of a rare fashion show in very conservative Saudi Arabia.

Saudi princess and former model Safia Hussein Guerras presented a new collection of abayas – wide dresses that cover the silhouette – last weekend in Riyadh, the capital of the Wahhabi kingdom, in front of a few, but, once, mixed audiences.

Under abayas decorated with patterns and rhinestones with more or less customized cuts, a dozen models, mostly Saudi Arabs, tried to reveal the glamor of this controversial clothing, for some a guarantor of public modesty, for others a symbol of oppression of women.

“I wanted to change the stigma around the abaya and veil around the world,” says the princess, who designed the Be Chic collection in collaboration with Belgian designer Christophe Beaufais. “If I set it at the level of chic and acceptance, maybe our generation will fully accept the abaya,” she added.

Wearing these clothes is still mandatory for Saudi women in the kingdom. The country, which wants to soften its image at the international level, abolished this obligation in 2019 for foreigners. But young Saudi women are increasingly leaving traditional black and loose-fitting clothes in the closet to prefer to cover themselves with brightly colored and more fitted cuts, which they sometimes leave open. Some continued the rebellion: they stopped wearing abaya.

The collection presented in Riyadh will appeal to women of different cultures and religions who share the same views on “modesty and elegance”, believes Christophe Beaufais, who works for a Saudi brand specializing in men’s dresses, called “thobe”.

The parade, organized at the Belgian embassy in Saudi Arabia, is part of the controversial desire of Crown Prince Mohammad ben Salman to change the image of a conservative and closed country, by organizing cultural and sports events, pop music concerts at a rally in Dakar.

But these efforts have been largely undermined by intensified repression in the kingdom that regularly forms the front page of the international press, including the murder of a critical journalist or the imprisonment of women’s rights activists.

Last weekend’s parade marked a step forward from previous attempts. In April 2018, French designers Jean-Paul Gaultier and Italian designer Roberto Cavalli highlighted the first Saudi Fashion Week, but the event was held behind closed doors, banned not only by men but also by cameras.

In June 2018, a video of dresses floating in the air, suspended from drones, during a fashion show in Jeddah, a city on the Red Sea, went viral on social networks and was ridiculed. Like a “parade of ghosts.”

Covered from head to toe in long traditional Gulf dresses, female models in high heels are followed around the pool, on the occasion of a rare fashion show in very conservative Saudi Arabia. Saudi and former model Safia Hussein Guerras presented last weekend in Riyadh, the capital of the kingdom …