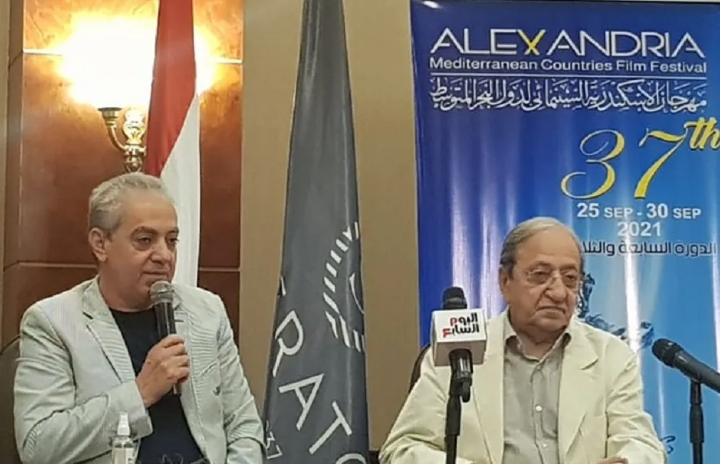 The symposium in honor of the great Syrian artist Duraid Laham was held today, Wednesday, as part of the activities of the “Alexandria Film Festival for Mediterranean Countries” at its thirty-seventh session, and was moderated by Prince Abaza, president of the festival, in the presence of Tunisian director Rashid Ferchi. Omar Abdel Aziz and director Basil Al-Khatib.

Duraid Lahham began his speech by thanking everyone present and Prince Abazi for honoring him, and said, “I am the dream Egypt, which is the leader in the Arab world, and I am very happy for this honor and I always love being here,” and sang is for Egypt.

He explained the secret of his love for children: “They are our future, and that is why I pay attention to them and treat them as a small human being capable of absorbing, and they are sometimes wiser than adults, and we learn spontaneous philosophies from them. , and I have faith from my granddaughter, and her love for the Creator, and that made me when I see the sentence written on the walls She says: “The head of wisdom is the fear of God,” and “I go to the head of wisdom is the love of God.” “

And he continued: “The sheik saw me on one street and told me if you were religious. I told him no, I am a believer. He told me what the difference was, and I told him, and I always explained to them the question of deep understanding of religiosity and religion and I was convinced and I hope that people control their minds, and as Ibn Rushd said, the trade in religion is most popular in societies ruled by ignorance.

The great director, Mohamed Abdel Aziz, was delighted, saying: “I am very happy with you, and I have been trying to make it happen for a while, and I had the hope and dream to make a film that brings Duraid with the artist Adele Imam, and I took steps to this, but the thing has stopped, and we always love your presence among us. ”Duraid replied to him, saying that we must continue to dream and whine to achieve what we want, and I hope to do business with the leader, Adele Imam.

As for director Basil Al-Khatib, he addressed Duraid and said: “I learned through my work with artist Duraid Lahham what is worth my whole life, which is an example of dedication, and together we finished the film Al-Hakim and I hope that it will be screened at the Alexandria Festival next year. “It provides support to Arab stars.

While critic Magdi Al-Taieb said: “I have a very strong connection with the artist Duraid Laham, he is a great poet, and he sent me an answer before that in which he wrote:” My love is without limits. ” There he deals with the problems of the Arab world and I thank him for what he has given us and for his awareness of the message of art from the beginning of his career.

He ended his conversation with Tunisian production director Ali Al-Zaeem, who said: I have a special relationship with the artist Duraid Bahamas and with Syria, and it is the only cinema with about 12 thousand spectators at the Carthage Film Festival, and it has achieved great success in Arab countries. .