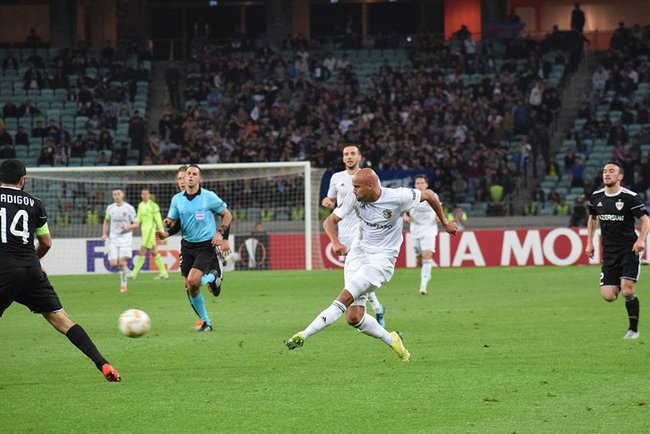 The fourth match was held in Poltava Group stage of the League of Europe. Vorskla was host to Azerbaijani "Karabakh". The meeting started unsuccessfully for Vasilije Sachko's division. They missed a quick goal. Arthur made a bad dog in the penalty area, Shust jumped out of the door and tried to pick the ball under the feet of Medvedev, but it broke. Penalty! Abdulov shot 11 meters in the corner. By the end of the inning, the teams played without dangerous moments and the result did not change.

The other half was interesting not so much that happened on the ground, as events on the stands. First, the judge had to suspend the meeting due to the pyrotechnics of the fans. And then the judge completely led the field team.

When the fans slowed down, the match continued, and the referee's main time was 12 minutes. And at the moment, "Vorskla" was the most realistic chance of escaping defeat. After a corner from the corner, Sharpar hits his head in the corner, but the goalkeeper "Karabaha" has pulled the ball. "Vorskla" lost 0: 1, but according to goal difference in the table above "Karabakh".

90 + 12 min The inhabitants of Poltava are in a hurry and this confusion prevents them from attacking.

90 + 9 min After moving from corner, Michel broke his head to the far corner, but missed the goal.

90 + 7 min Back in the game is the goalkeeper "Karabakh", who refuses the ball after returning from Kulah

90 + 4 minutes Danger! After passing from the corner, Sharpar hit the ball in the corner, but Halldoursson got the ball

90 min Refused for 12 minutes by the Referee

84 min Kulach approached the penalty and moved into the center hit the bottom, the goalkeeper "Karabaha" easily took the ball

81 min Replacement at "Karabakh": Instead of Zubira, Madatov was released

77 min After submitting in a step Chizhov hit the contact, it turned out too

76 мин In a penalty kick, Kareka took the ball from the back to the goal and tried to strike through himself, but not much and not very well worked

75 minutes the match is continued!

Although there is no information whether the fight will continue today!

65 minutes The referee guided the team with the field! Firefighters were thrown out of bleachers!

63 min Sklar got it yellow card

61 min It was dangerous at the gate of Vorskla. Zubir ended up a counterattack, but the ball fell off the leg and the player "Karabakh" did not score a goal

59 мин Kulach sent a counter-attack from Poltava to Kolomoja in the penalty area on the go, but he did not catch the ball too much

52 min Jacob received it yellow card for a rough violation

51 min Continuation of the battle in Poltava

49 minutes The referee stopped the match because of the pyrotechnics of the fans!

48 мин Poltava actively started the second half of the game, the game is constantly taking place on the field "Karabakh", but without a goal

The first half is over!

45 min Nothing compensated the judge

44 мин Again without a blow. Poltavchani sanctioned right and then a discount, but again on the ball were the defenders who were in front of Kulah

37 min A long attack on Poltava, there were several ancestors from the right wing, but the defense of "Karabakh" surely plays on the "second floor" and takes the ball through the penalty box after time

31 min Teams do not play any gates in the middle of the first half.

24 min "Vorskla" tries to attack, but can not seriously create anything at the "Karabakh" Gate, all attempts to end by losing the ball

13 min GOAL! Abullaev just manages to hit the ball Šust struck the line, but did not get the ball

12 min. Penalty! Arthur had unsuccessfully given a pass in the penalty area, and Sust entered the opponent's foot and mistakes

10 min Kolomots was injured in the center of the field, but the Ukrainian attack was able to continue the fight

6 min After passing, Kolomoets from the center hit the head beside the gate

4 min The child earned a yellow corner for Poltava

It sounds like the anthem of the European League in Poltava

He commands on the ground

Bookmakers consider the favorite club a Ukrainian club. The winners of the Vorskla victory were 2.62, the victory of Karabakh was estimated at 2.87, and the draw was 3.00.

Remember that another Ukrainian club is playing in the European League today. Live broadcasts Dinamo – Rennes.