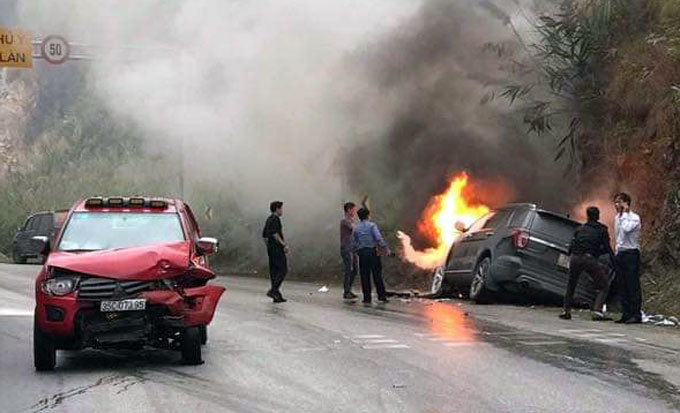 When it started off the Mai Chau (Hoa Binh) hill, the Ford Explorer was hit by a truck, three people in the car were able to escape.

More than 16h March 15th, the Ninh Binh marine truck drives on the highway 6 from son La to Hanoi. Coming to the slopes of the commune Tong Dau (Mai Chau, Hoa Binh), a male driver picked up another car and hit the Ford Explorer in the seventh seat, carrying 3 people down the slope.

The thrust was strong, which led Ford to be forced to descend into the gutter near the foot of the mountain and set it on fire. About 30 minutes later, the car had only an iron frame. The truck is located in the middle of the road and is severely damaged in the head.

Hoa Binh, Provincial Traffic Safety Board Chairman, said that before the Ford vehicles were on fire, all three people on the car escaped safely.

The traffic police arrived at the canal and clarified the cause. However, according to the leadership of the provincial traffic safety committee, from the scene and the witness, "truck drivers have intervened, taken over the truck and forced Ford on the road."