Great performance Adisak Kraisorn at Thailand's competition against Timor Leste not only has the world become inspirational.

Thailand Win 7-0 in Timor Leste on the AFF Cup in 2018. The brightest star of the match was Adisak Kraisorn when the 27-year-old striker scored six goals. It should be noted that Thai No.9 recorded 6 times in only 6 rounds, which means that the ability to turn 100% into a goal. 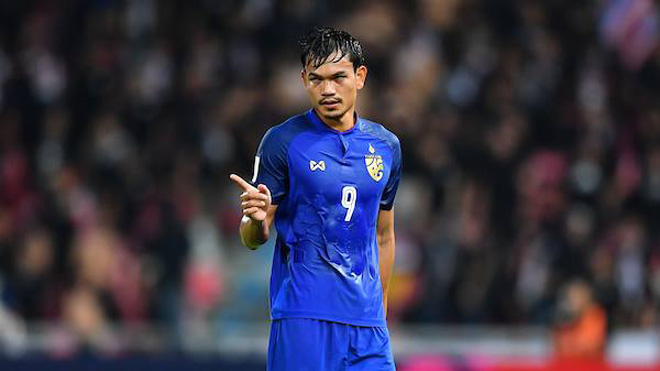 Adisak took three minutes to break the net and Timor Leste before the end of the first half, this player added another three goals. In the second half, Thai number 2 made two more goals before leaving the court in the 87th minute.

Adisak Kraisner's brilliance immediately attracted the attention of the world's media. Fok Sports Asia gave the Thai striker a score of 10/10 in a post-match post.

In another article on Fok Sport Asia, Adiche has praised the ability of Adisak to take advantage of the opportunity and believes that the striker will probably win the "Golden Boots" title of the 2018 AFF Cup, the legendary Singapore, Noh Alam Sah was established in 2007 (10 goals).

Adisak Kraisorn has just returned from his illness after nearly a year of treatment. This is an expensive price used by Corriere dello Sport from Italy in an article titled "6 stages for the score of 6 goals," says Adisak Kraisorn.

Yahoo Sports also reported an incident under the title "The Thai striker ended his thirst, defeating him by having scored six goals in one game." Ski Sport Italia also reported on the title praising: "Surprised Thailand: Adisak Kraisorn 6 goals / games."

"The attacker of the Thai national had an unforgettable match when he contributed 6/7 goals in the home team's victory, which is also the peak of Adisako's return. After almost a year of injury and the perfect thing is that the striker needs only 6 shots to make the story happen.

Adisak is also genuinely interested in the interview after the match. "In the last eight months, it was very difficult for me, sometimes I lost my faith and I want to give up, but luckily, many people were with me and they helped me.

I also thank Coach Milovan Rajevac. He helped me although I had not played much in the last two years. Our goal is to win the AFF Cup, but Thailand still has a long way to go. "

At the opening of the AFF Cup game, the light of the Thai striker was seen.