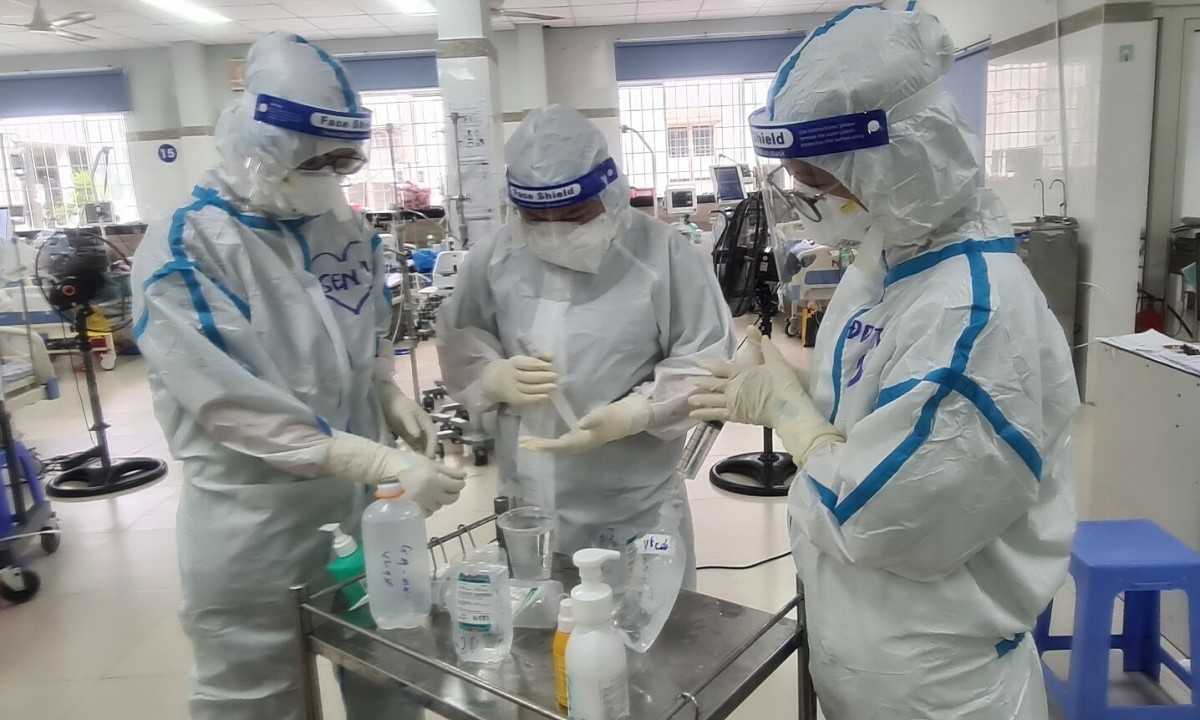 Dr. Phan Wu Anh Minh called the man to inform him that his wife had died of Covid-19 after giving birth, the husband kept asking “if the doctor was wrong”, and then burst into tears.

This is one of the many calls that medical staff make daily to the families of patients from the Covid-19 Patient Resuscitation Center (ICU), Ho Chi Minh University School of Medicine, and Pharmaceutical Hospital. The job of telephoning to inform the family about the health condition is a problem for the medical team.

Dr. Minch said that the pressure on intensive care is always great, patients are in a difficult condition, they require intubation, mechanical ventilation, etc., so at the peak of the epidemic, several deaths were recorded, up to 7 people for a few days. He is often the one who calls to tell the sick family the sad news.

“Partly because I’m a leader, partly because I want to keep the spirit of my colleagues, especially young doctors. But it’s something that makes it very difficult for me to face. Many days after I announced 3-4 such cases. I couldn’t I can’t swallow when I reached the box of rice, “said the doctor.

In the past, the health of patients in intensive care was constantly explained to the family. But then the family members were not allowed to enter, the number of patients was too large, so the doctor did not have much time to call to explain in detail until the patient unfortunately passed away.

“So when they get a phone call, they are shocked, especially a young patient. Many families take their loved ones to the hospital and then they don’t know what the news is, suddenly the news of death is even harder to accept. It should be shared and encouraged,” said Dr. Minh.

In addition to outgoing calls, his phone is always flooded with notifications of new cases that will be transferred soon, information about serious cases that require consultation or problems that must be resolved during the tour. “Just like that, the machine shut down for many days without it being known. Sometimes in the morning we distributed medicines to more than 200 patients when we received the news that 10 new people were on their way to move in,” said Dr. Minh.

Once, one patient (49 years old) was transferred from a field hospital in district 8 in a very serious condition, with 99% mortality, frozen lungs, which almost did not function anymore. A team of 5 people, including two doctors, three nurses, were quickly intubated because the patient had previously received high-flow oxygen, but did not respond, SpO2 was only 80%, severe respiratory failure. At the same time, the doctor contacted his family, saying “the patient may not survive the night.”

“It is the most heartfelt sentence when receiving a patient, although the family is psychologically prepared, disappointment is an inevitable emotion. At that time, the patient’s lungs were so bad that the level of enlargement was only 1/10 of normal people, the lung volume is like a baby’s lungs,” he explained. is dr.

For maintenance, the on-duty team in charge of placing the breathing tube, put the patient on his stomach in order to slowly improve the condition of the lungs. For a week in intensive care, the indicators were “brighter”, he immediately called to inform the patient that he was gradually recovering. According to Dr. Minch, in cases that require intubation, mortality is very high, if they pass it is a miracle, the joy multiplies. “The sound of‘ thank you, thank you ’from the other end of the line made us grateful we didn’t give up,” Dr Minh said.

On September 8, the patient was extubated and transferred to oxygen through the nose (cannula). The patient was released from the hospital on September 17. In recent days, the number of severe cases has increased at the Covid-19 Resuscitation Center, which is connected to the Medical and Pharmaceutical Hospital of the University of Ho Chi Minh City. In the morning hours of October 8, the center discharged 304 patients to home isolation, 48 patients were transferred to district hospitals, field hospitals and rehabilitation hospitals.

Working on a similar job in the intensive care unit of Tai Ninh General Hospital, Dr. Nguyen Thuy Linh (a delegation of doctor Kuang Ninh came to the hospital) admitted that it was very difficult to inform the family about the patient’s death.

Once F0 died over the age of 80, the doctor called her relatives and found out that her daughter was also being treated here. According to the data provided by the family, the treatment team found the 44-year-old woman in another range, in a coma, with a rather difficult prognosis. “We are very sorry,” Dr. Linh said.

After this case, Dr. Linch and his colleagues always try to report regularly on the patient’s condition so that the family can soon understand the situation and mentally prepare if the worst happens, or to connect with other doctors. Patients are family members if they share the same treatment area.

Initially, Tai Ninh was one of the places with many difficulties and lack of medical equipment, while the number of serious and critical patients transferred from lower levels was constantly returning. There are people who come to the treatment area who have changed too much, all interventions are no longer effective. At that time, doctors, regardless of specialty, rushed to save them. Many times during the off-shift, the doctor was also burdened with the work of nurses and assistants, trying to cure the patients.

So far, the number of new infections in Ho Chi Minh City and other provinces has decreased, the number of hospital discharges is higher than the number of daily admissions, and some field hospitals have completed their missions. The Ministry of Health proposed that the city organize the withdrawal of help groups to the locality, by October 15 at the latest, in order to ensure the health of the medical staff and perform professional tasks in that locality.

After many months of fighting the epidemic away from home, Dr. Linch has now returned to the place to isolate himself, and Dr. Minch continues to work on the battlefield. Every day, in addition to visiting patients, he reads more documents about Covid-19 to hone his expertise, hoping to contribute as many new “maps” to help the seriously ill return home.

“The fight has not stopped and we are all still racing, we are still doing our best,” said Dr. Minh.