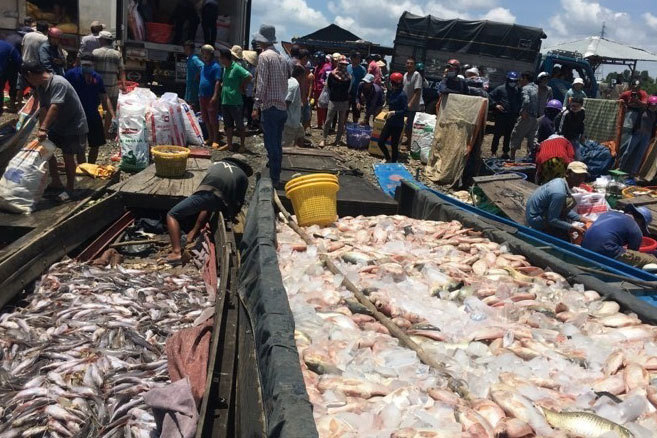 The province of Dong Nai will investigate a land surface of more than 100 meters wide, dig about 3 meters deep to find illegal drain pipes in accordance with human accusations.

Mr Tran Trong Toan, Director of the Dong Nai Department of Natural Resources and Environment, said he would clarify and process information that people are accusing AB Mauri of provoking environmental pollution this morning. , May 31

According to him, besides participants of an interdisciplinary team that will excavate to find an illegal discharge of pipes as people condemn people will invite people from the municipality of La Nga (Dinh Kuan) to attend the witness; publish the status of works in the field of environmental protection, in particular 3 water reservoirs in the factory; organizing people to see waste facilities AB Mauri …

In case of finding an underground pipeline for waste disposal, as reflected in humans, Toan said he would be based on the law to deal with AB Mauri company.

As for the conclusion that the cause of the fish was lost in the La Nga River, Mr. Toan confirmed that DARD collected the content to report PPC.

Answering the question of why not use ultrasonic methods for finding a pipeline believed to have been buried in the country, the Department's director said that the Southern Environmental Protection Agency (Ministry of Natural Resources and Environment) will have instructions.

"We dig from a fence to the edge of the La Nga River, it is expected to dig about 3m depth, this area is about 100m wide from the wastewater treatment system next to the land by the river. La Nga, "said Toan.

In the absence of a pipeline like a denuncator, Toan said there will be concrete answers today.

"When people judge, we calculate that we will monitor the process of receiving and processing individual complaints. However, when the appeal was publicly publicized in the mass media, AB Mauri had a document requesting digging to clarify the contents of the appeal, so the Provincial National Committee issued a directive, "Mr Thong believes.

Mr Toan also confirmed that this was the first time that Dong Nai DONRE received a complaint that the waste water pipeline was buried in the ground.

"In 2011, people were charged with underground sewage pipes from a main plant connected to the AB Mauri waste disposal site. At that time, it was once excavated, the record confirmed that it was not. As for this complaint, we received for the first time in connection with the content of the connection from the drainage area to the river La Nga.

I will ask the company to publish all the issues that people are concerned about. We will deal in detail with this issue.

Mr Tran Phong, director of the Department of Environmental Protection of the Southern State, said the Department had sent officials to take part in the excavation on the ground to find a waste pipeline that people accuse of being buried in the ground.

In the KH corridor yesterday afternoon, Minister of Natural Resources and Environment Tran Hong Ha shared with VietNamNet, there is currently no assessment of the causes of white dead fish on the La Nga River due to heavy rain or something else.

"In order to get the basis for the conclusion, from the appearance of dead fish, it is necessary to reconsider the entire source of release. Heavy rainfall must also come from the place where the pollution flows, of course, does not turn off if, in the case of rain, PH concentration in high rainwater can exist and the situation of shocking fish, but a careful assessment must be made to bring a clear conclusion, "the minister said.

He also said that Permanent Deputy Prime Minister Truong Hoa Binh directed that this be clarified. The Ministry has now assigned the Environmental Inspection Unit in the south to re-examine facilities for the disposal of waste near the dead fish.

Since it is a special irregular inspection, and not a periodic inspection, it is impossible to determine how long the inspection time will last, if necessary, can be extended for a full assessment.

"The most difficult thing now is to re-evaluate the sources of discharge, of course, that the current source is available, but for the conduct of surveys even before death, the fish need time" Minister Tran Hong Ha said.

On May 27, a press release, Dong Nai Vo Van Chanh's deputy head said that the white fish died on the La Nga River due to natural disasters, refusing to release pollutants.

"In this season, the water of the river La Nga is low, when there is heavy rain, many impurities, the waste from the upstream stream is poured along the high density of agriculture, causing the amount of oxygen deficiency leading to the mass death of fish" – G. Chanh said.

From the questions of people about the discharge of waste by AB Mauri, the functional strength of Dong Nai decided to dig out the area for clarification.